As many know based on proximity to coast lines and subscriptions to proper media out lets, the world ended approximately three to five months ago. Due to this greatly effecting our Trans Am 2 series and not even being able to use Canadian drivers as cannon fodder, we decided to run for a National championship in SCCA. This year’s runoffs were at Road America, in Elkhart lake Wisconsin, this track is also on our TA2 schedule.

The highlights for the TA2 race at Road America can be seen here https://youtu.be/XyR0-MJx1Pk

We had a good race, but a red flag ending mean we finished 5th. Brad Macalister did receive the Cool Shirt “Cool Move of the race award, for passing and avoiding the bulk of the wrecks. The race weekend, followed by another test day ended up with the car having a control arm failure and resulting in a high-speed lawn mowing, dirt digging experience. This required the car needed extensive amount of work before the runoffs, including welding, new suspension, and some bending… These highly technical procedures are more commonly known as “thrashing”.

The Sunday test day at Road America, started out well and the car had a lot of speed. Our Monday test session saw things really heat up, literally. A fuel rail bracket failure caused an engine fire. The damage to the car was extensive and overwhelming. The entire engine wiring and firewall harness was merely copper scrap metal at this point. All the steel braided hoses were burnt beyond recognition and the injectors, coils, throttle body and other sensors had all melted into something resembling playdoh to an optimist, or dog waste, to a pessimist…

We immediately set to getting the car disassembled, and parts on the way. Trevor from MCS took our front dampeners with him in his carry on luggage to MCS Headquarters to be fully rebuilt. Five star bodies and Mike Cope coordinated with us to get new body parts and windshield, and Summit Racing overnight shipped us everything we needed to get the car running again.

With the immense amount of work, we were still able to get out for the last qualifying session. Our times were reflective of our struggles and our only qualifying session was also our shake down session. There were a few drivability issues with the car, but a 1:15.2 put us in 5th overall. The race ended up being very eventful, with two restarts. In the end Brad was able to maintain his second step on the podium. Stay tuned for video

Last chance to get on track this year! 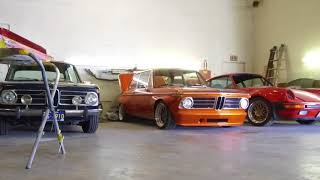